Departments
Add  Cancel
Find all products for your:  Go 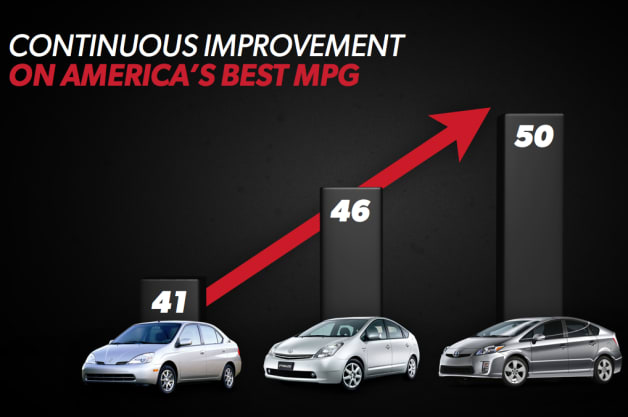 There's some mystery surrounding the fuel economy level of the next-generation Toyota Prius. The closest we've had to an official number is 55 miles per gallon, which was hinted at by Toyota Motor Corporation's managing officer, Satoshi Ogiso, last year. That number wasn't an official target, but the company even provided a graphic (above) showing how each next generation Prius beat the previous one by four or five mpg. Since the current, third-gen model gets 50, well, we have been left to guess that 55 is the next logical target.

But, according to a new report in Automotive News, the new, fourth-generation Prius that's due next year will come in two versions, with one having a bigger ego – sorry, eco – than the other. AN says that the model will arrive with a standard nickel-metal hydride battery pack in a version that gets "about 55 mpg" and then a new "eco grade" version with a li-ion battery that "will be rated at more than 60 mpg." AN says this information came from company executives who were speaking at an August meeting with Toyota dealers. Our sources within Toyota say that they haven't heard anything about two high-efficiency models, so we'll take this with the requisite grain of salt. The current version of the Prius Plug-In Hybrid does use lithium-ion batteries, but this is the non-plug model the dealers are talking about. We think.

The dual-battery strategy is certainly a rumor we've heard before. We had thought that the li-ion pack would be for an extended EV range (the current Prius has a barely noticeable EV-only range), but such a pack would be lighter and could boost efficiency, too.

In other words, we look forward to hearing more during the upcoming auto show season.